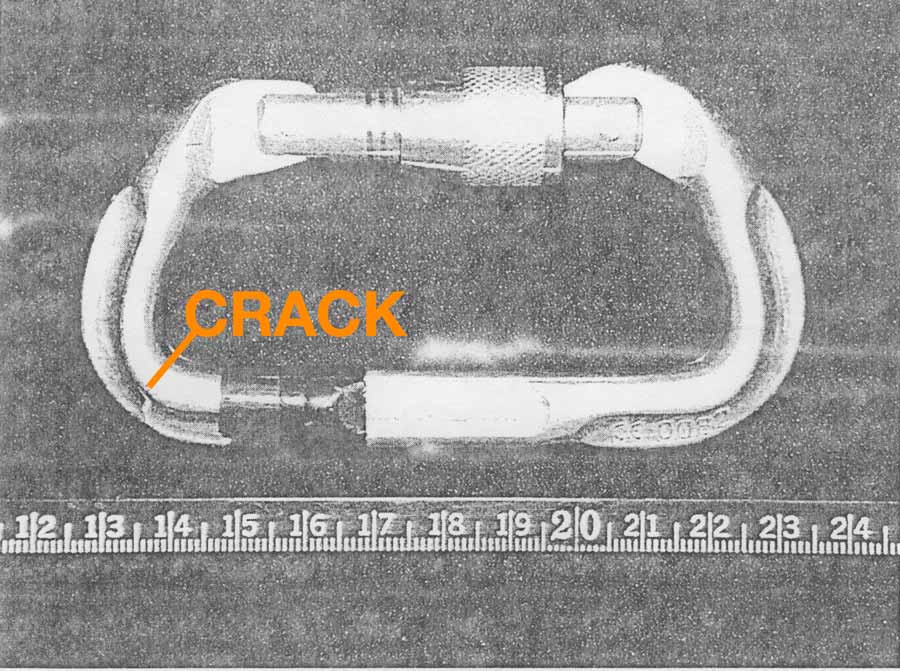 I’m going to tell you a story that happened a long time ago in hopes that it further reminds you to always check your climbing gear.

On Sunday, April 9, 2000, my climbing partner and I were climbing a route called Fandango on the First Flatiron in Boulder, Colorado. It was a nice day to be climbing with the sun shinning, and I’m tied off at the third pitch anchors. I look down at my Locking-D Omega Pacific carabiner and see…

But first let’s go back and know that I am always careful with my gear. I treat my climbing gear with respect and if it is dropped, I retire it. I store it properly, always inside the house, and replace webbing and ropes as needed. I also don’t loan out my gear unless I am done with it.

Ok back to the story. I see a mark on the carabiner, is it dirt or a scratch? When I try to rub it off I notice it is a crack. How did that happen? I hadn’t dropped it or let anything happen to it. I quickly added another locking carabiner to the anchor to take the place of that one. Perplexed how this had happened I made sure not to use it again.

We finished the climb without incident and the next day I called Omega Pacific, the maker of the carabiner. They asked all the normal questions and asked that I send it in for testing and analysis. I had purchased the carabiner in November of 1998 from a local climbing store in Ft. Collins. So it had some climbing on it, but as I said before, never a fall nor had it been dropped. I sent it in and they sent it off to Alcoa, the aluminum manufacturer. While we waited for the results, Omega Pacific allowed me to try new ice climbing gear, as well as other products.

The results from Alcoa were completed and mailed to me in late September 2000.

A summary on August 03, 2000 stated “ The indication was not observed on the finished carabiner and was only noticed after it had been put into service.”

The method of analysis was done by “optical and scanning electron microscopy were used to examine the carabiner…The carabiner was then examined in a Philips XL30 field emission gun scanning electron microscope (FEG SEM) in the as received condition…The upper portion of the failure is classified as a ductile failure. The lower portion (more horizontal crack) has also pulled apart. “

Also included was a letter from the Quality Assurance Supervisor which stated the following:

“We apologize for the delay in forwarding the extensive laboratory analysis completed in our corporate technical center in Pittsburgh, Pennsylvania.

The conclusions of the report agree with our initial findings that the origin of the condition occurred in our hot rolling mill and was then accentuated by your bending and forming of the carabiner. The initial indication of the condition was there after forming and was not caused by service or use in the field.”

So the crack, an anomaly which started as a tiny imperfection during the manufacturing process, came from inside the carabiner and worked its way to the outside over time.

So the saying nothing is perfect, is true. I know both Omega Pacific and Alcoa did their best in creating a great product but sometimes imperfections happen.

So always check your gear. 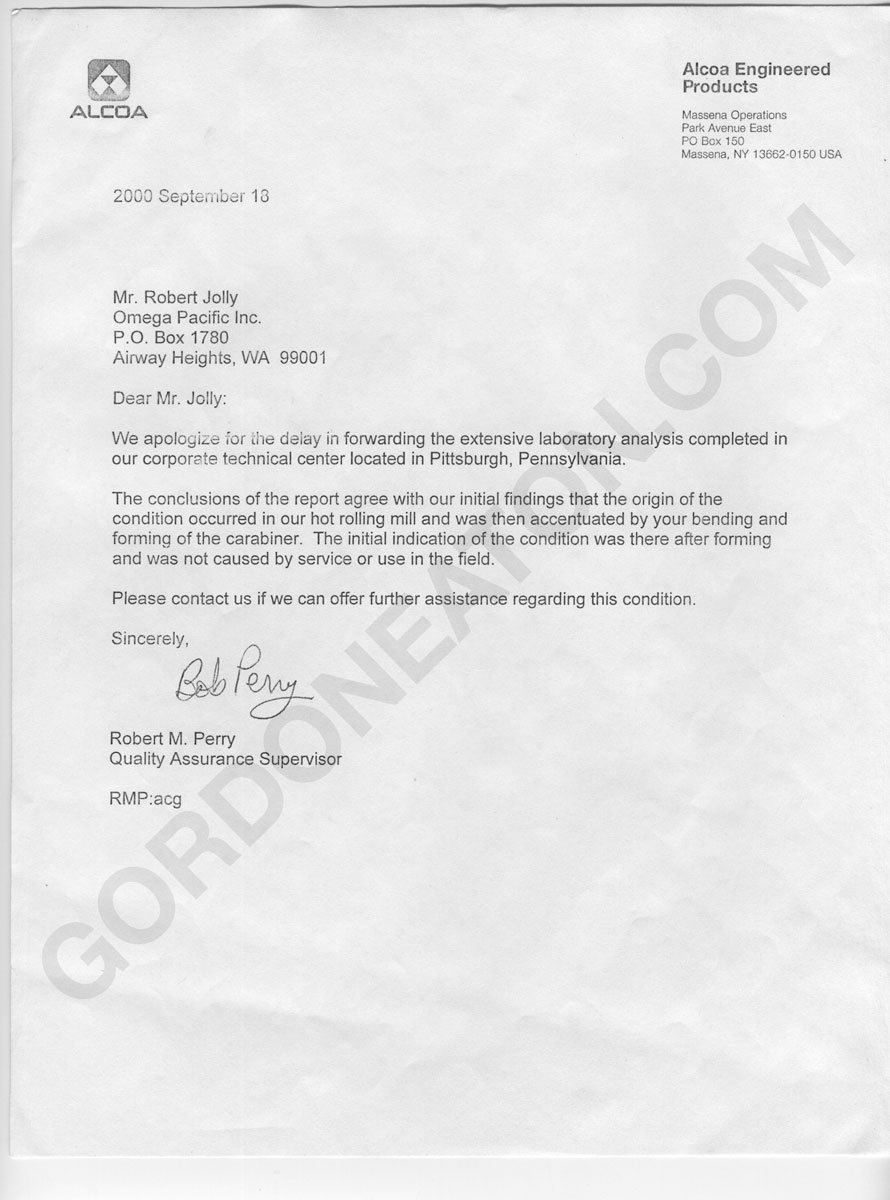