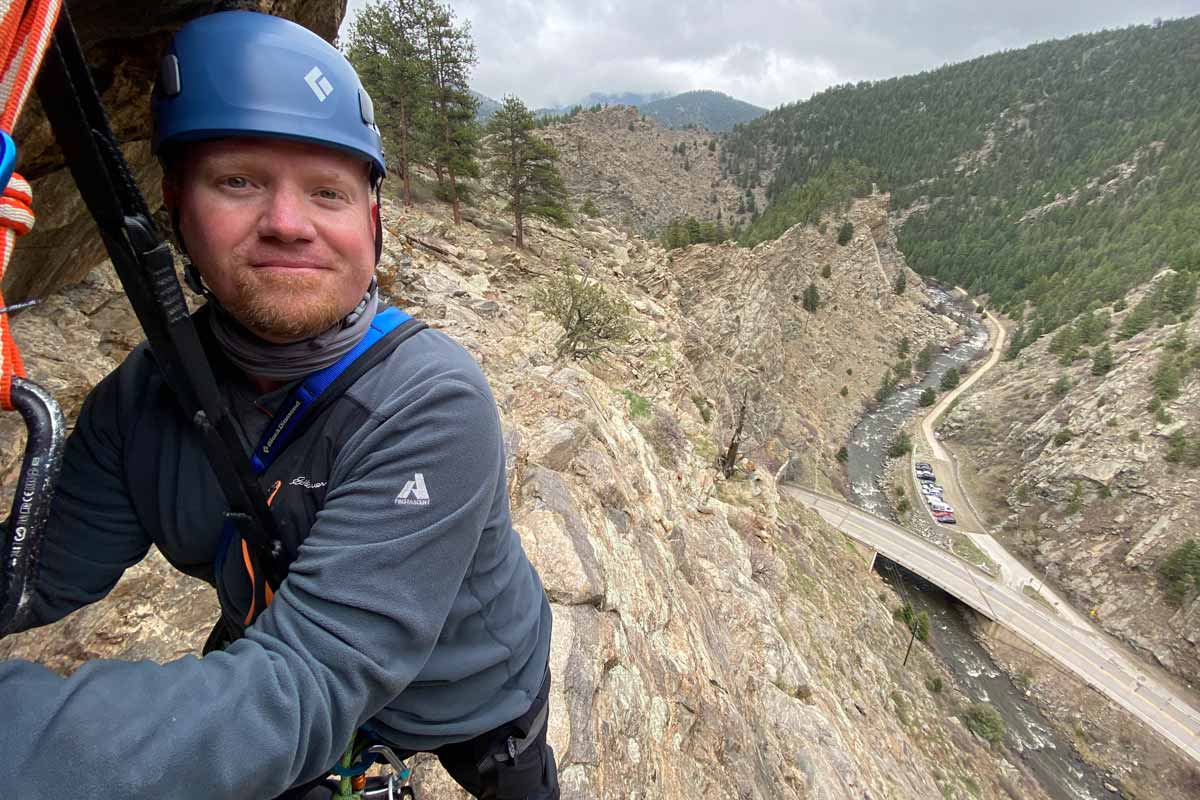 “Action can be painful. In my experience it is easier to lie still, to remain inactive. Change is difficult, it can be painful, physically, emotionally, spiritually. But to choose inaction is, for me, the same as doing nothing at all.”
Michael Sharp

Michael’s memorial was going to take place on May 2, 2020 in Washington state. I wanted to be there but COVID changed the world and the memorial was postponed. However, something amazing did happen that day. Although I had recently been climbing indoors, I went climbing outdoors, for the first time since 2008.

Michael always said everyone has a “tiger” that gets us in the end. When the tiger came for Michael, he said he would like to climb Mount Shuksan. I told him then that I would love to go with him!

For me climbing seemed like a distant memory, another lifetime. I had quit climbing, gone to college, had kids and pursued a career in television and also gained a lot of weight. Climbing was in my past. But as all climbers know, when your climbing partner calls you, tells you he wants to climb again and then asks you if you want to climb with him, then of course you say yes! And when your that  partner informs you he also has terminal cancer, then you don’t waste time. You begin the process of getting in shape again, become reacquainted with the gear, and start to learn to love the sharp end once more. I started my return journey by climbing in a local gym, purchasing new gear, and getting belay-certified. It is amazing that we never forget how to tie a figure 8 knot.

During 2019, my largest television gig had ended and finding new work had been difficult. I was also dealing with the effects of being very overweight, as well as having had to deal with kidney stones and gout. Since my peak weight of 277 pounds in 2016, I have been making progress but I nowhere near my original climbing weight of 170 pounds when Michael and I were climbing. But things were changing. After months of minimal work, in November, I was fortunate enough to find a job in a different field and very thankful to be employed.

And then the tiger came… Michael passed away on my first day of training.

That morning, I had a feeling that the end was near, so I said prayers for him. Later that day, I heard what I had feared.

This brings me to May 2, 2020. In my new career I met another Michael (Mike) and he is also a climber. He, like me, grew up in Oklahoma, so we also have that in common. He is also one of the most confident, yet safest climbers I have met. He agreed to take me climbing and I would follow him as he led.

Our adventures began in Clear Creek Canyon, climbing Yellow Dog Dingo. Although not a difficult climb, it was fun to be up on the rocks again. The air beneath my feet, accentuated with the river far down below, I felt this was exactly what Michael Sharp would want me to be doing on the day of his memorial.

Over the summer I have been able to climb in several places, with great climbers, and I have even led some climbs. My focus for the winter is to become a better climber and although Michael and I would never climb again, I did tell him I would climb Shuksan for him. So my goal in 2021 is MT Shuksan.

I still have a some weight to lose but I am on my way. Kidney stones are still happening but I am working with a different doctor now and I have confidence that things are gradually improving.

Until the tiger comes for me, Michael’s motto was to “Never Give Up!”

Climbing is Dangerous, so don’t do it. This is just a report on my experience and is not instruction. So don’t climb because you might die or worse. 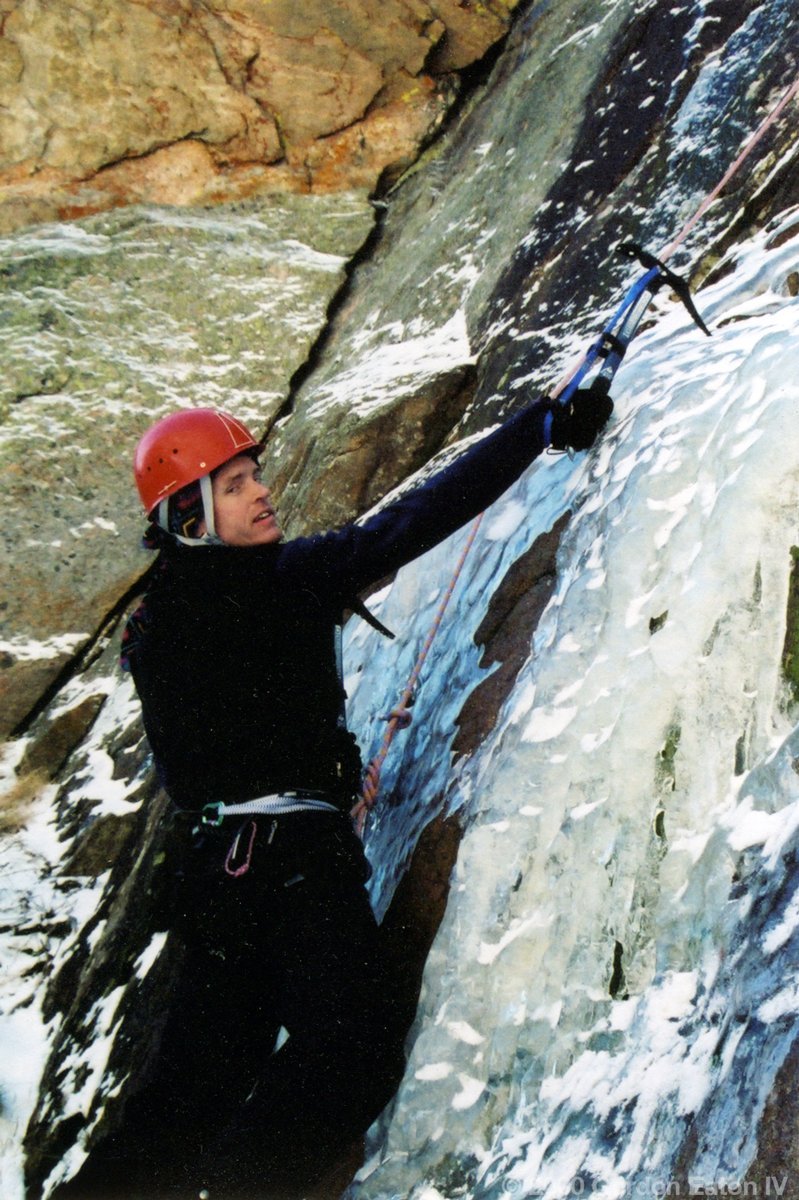 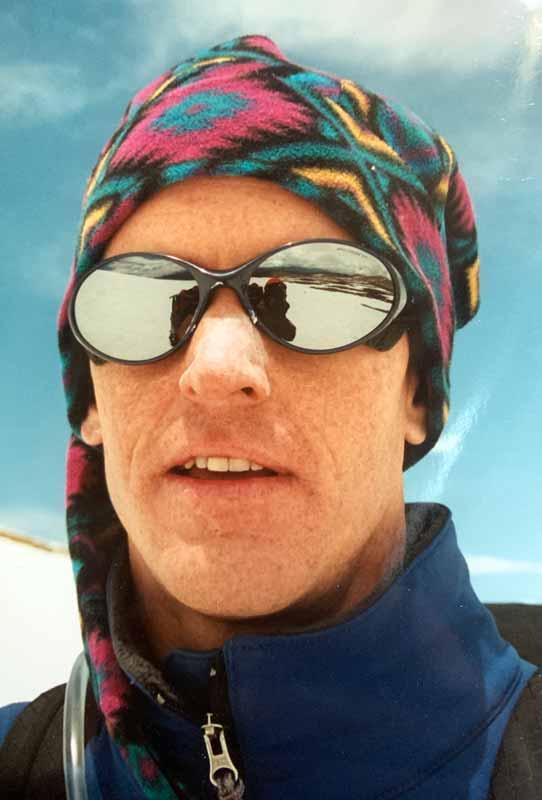 Looking down from the final pitch of Yellow Dog Dingo. 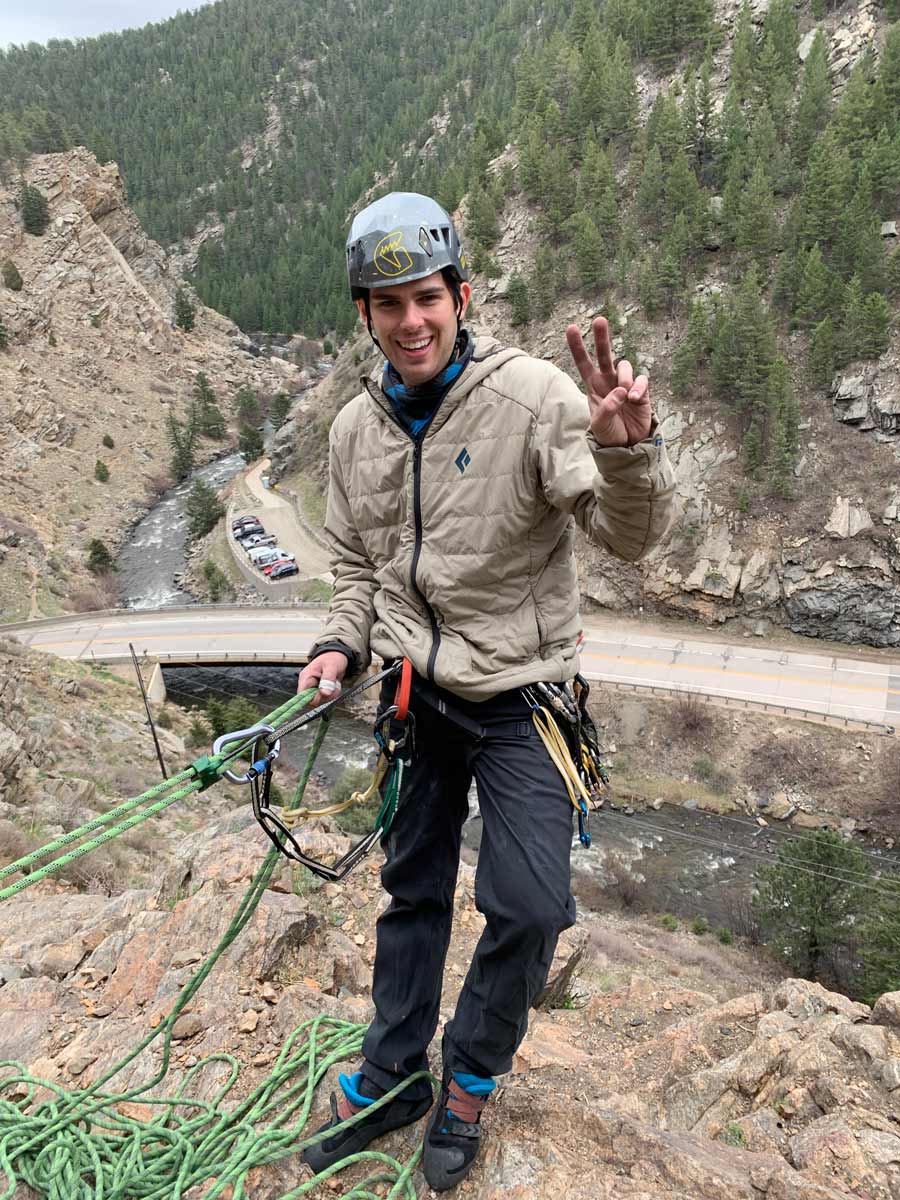 The New Mike aka Mike Rollow 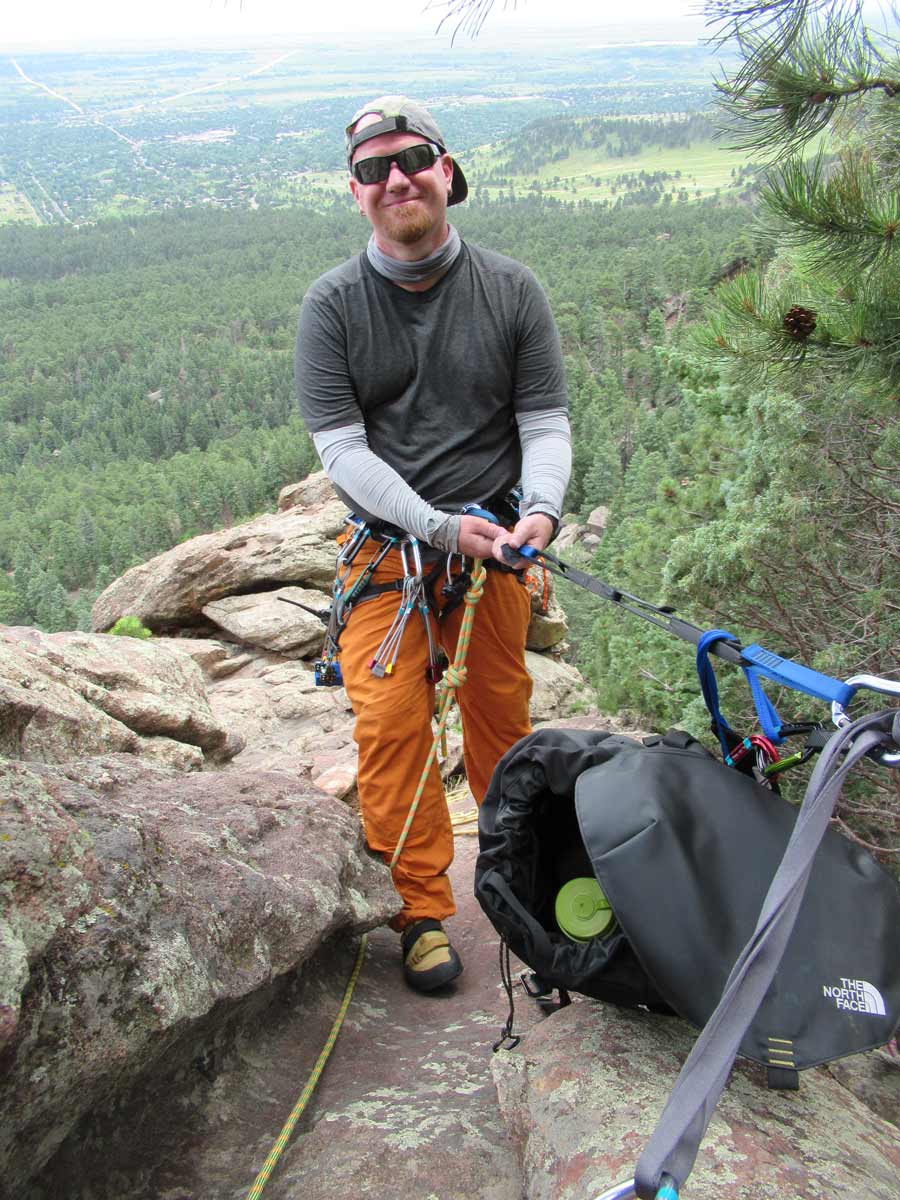 Hanging out on the second Flatiron.

Hanging out on the First Flatiron. 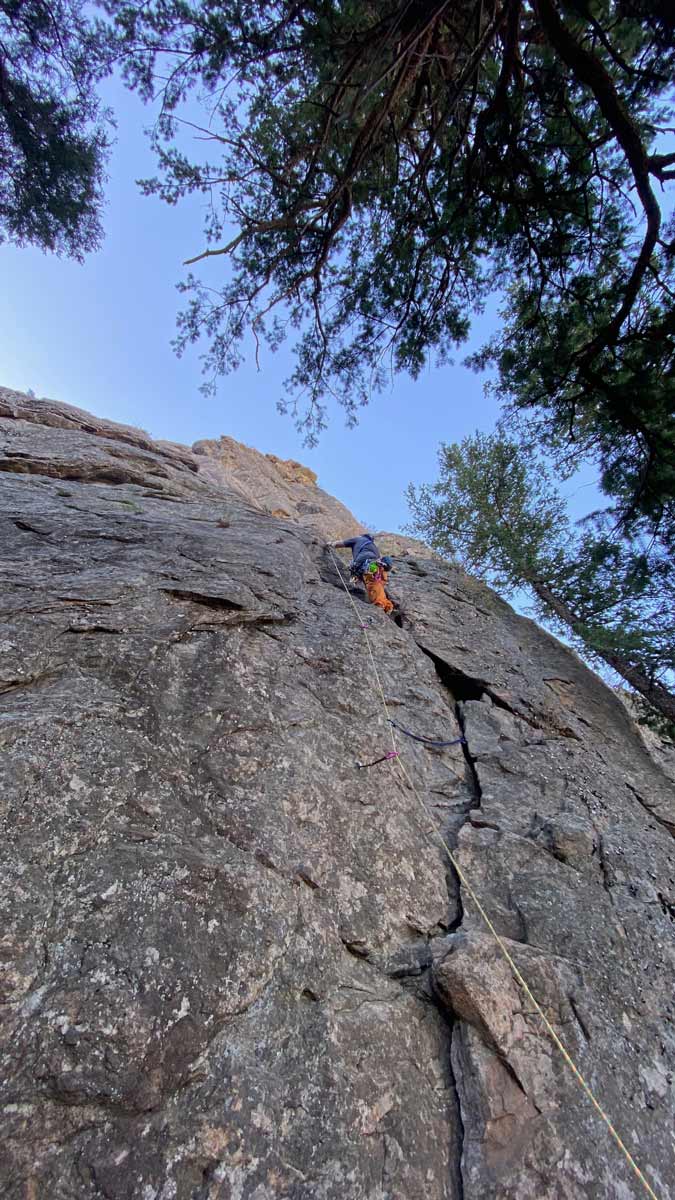 Leading the first pitch of Trenchtown. 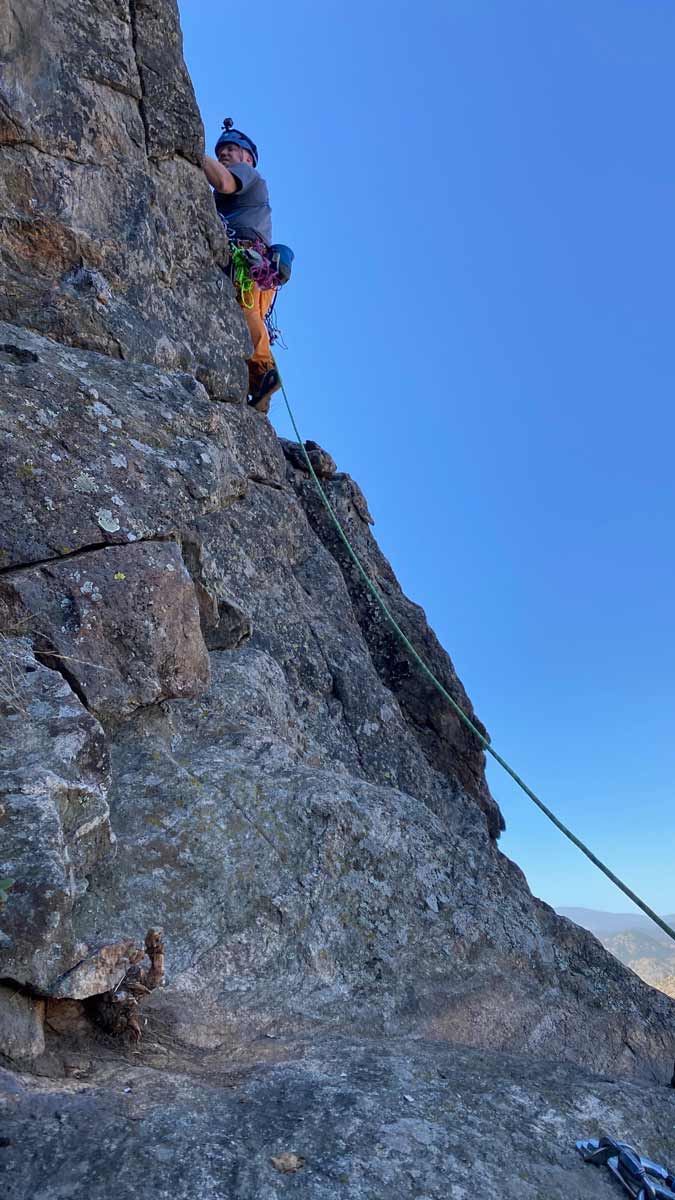 The fun, final pitch of Trenchtown.